(You'll pick your shipping method in the next step)

About Us here at VTP

HGV Truck Parts and VTP, where did it all begin?

From Farming to Transport

The late Henry Mattison Richardson was the youngest son of a small family run mixed produce farm at West Ness, located on the southern edge of the North Yorkshire Moors

The farm was not big enough to sustain both him and his elder brother, so Henry looked into other agricultural related areas, one of his first ventures was dealing in livestock, this created a need for transport and the purchase of his first truck, a Second Hand ‘O’ Series Bedford, maybe not realising this was to became the catalyst for his future business

His first lorry is pictured below, he once ran this wagon off the road and rolled it over one foggy night on the North Yorkshire Moors 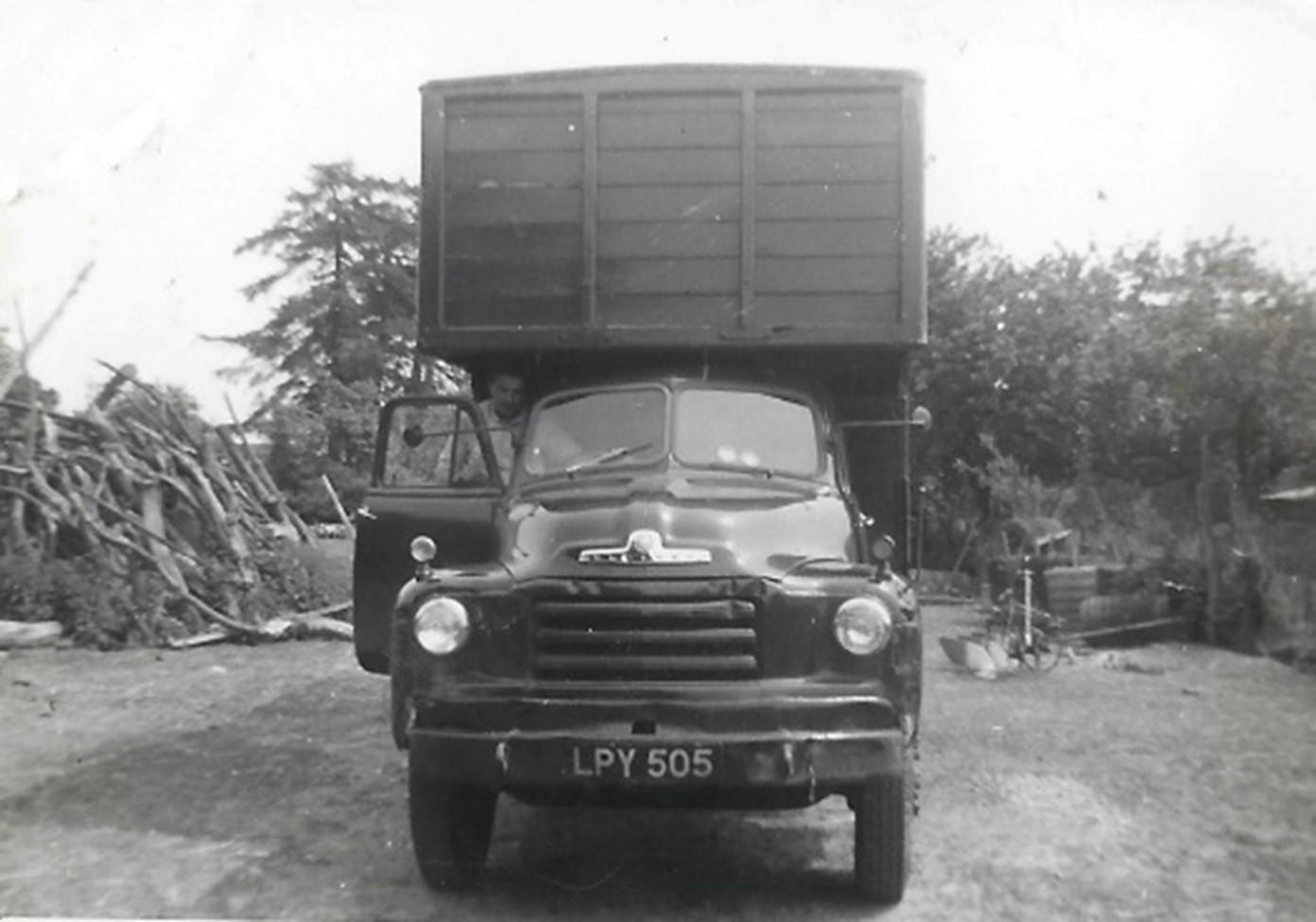 In those early years Henry bought vehicles from a wide range of British manufactures [in those days there was lots to choose from!] he purchased Ford wagons, a number of Commer 4 Wheeler Lorries, a Foden 8x4, a Guy Warrior, Leyland Comet, and one or two Thames Traders, but the back bone of his fleet was Bedford wagons in 16 ton specification, ERF 6 and 8 wheelers, plus tractor units.

Henry continued to seek out and take advantage of emerging technology, for example, at a time when most HGV trucks had four wheels, he invested in the very latest 8-wheelers. This caused great interest when a feed delivery arrived on ERF, Foden or Guy 8-wheeler Bulk Blower trucks that no one had seen before. 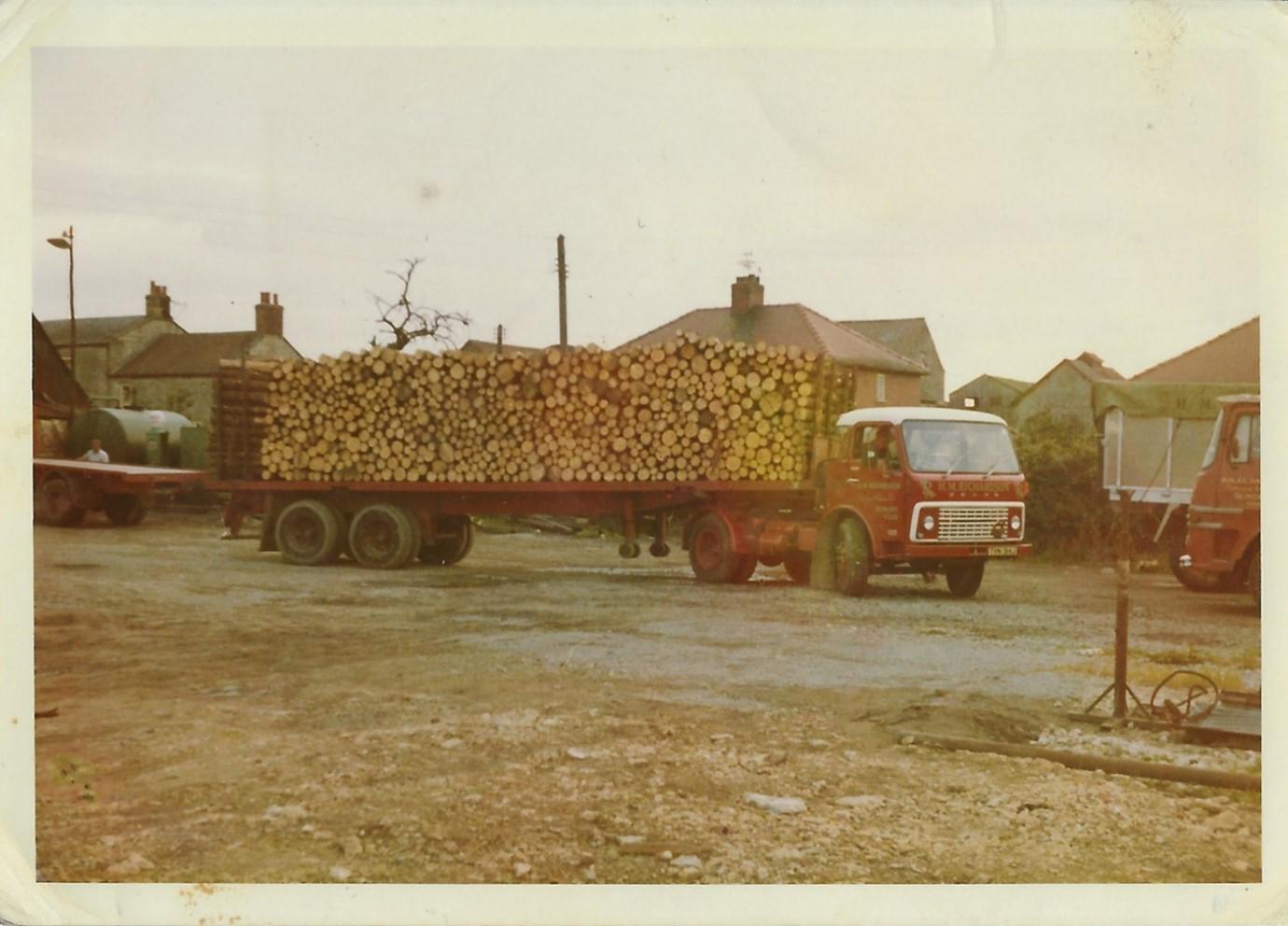 For the sound business reasons of fuel consumption and durability, his preferred choice was to operate trucks fitted with Gardner engines, but Henry was only too well aware of his wagons having very noisy large capacity naturally aspirated engines, a cab that was sometimes hot and sometimes very cold (depending on the seasons) no power assisted steering or clutch and the long hours his drivers endured, the lorries of those days put great demands on the driver and made for an arduous working environment.

In spite of these difficulties, the business expanded and flourished, then in 1969 a new player arrived when Volvo got into the UK HGV market and Henry very quickly got himself a test drive in a Volvo F86. He was amazed at the performance of the relatively small [for the time] Volvo TD70B 6.8 litre turbocharged engine producing 186 BHP, driving through the slick Volvo R51 synchromesh 8 speed range change gearbox. He was immediately sold on the whole package and ordered his first F86 truck, registered TVN314H to be delivered in 1970 supplied by the fledgling Crossroads Commercials for the princely sum of £3300.00. Henry was quick to embrace this new truck manufacturer and from then forwards, [bar a couple of exceptions] every new commercial lorry Henry bought was a Volvo.

Below is the first addition to the HM Richardson Volvo fleet, a 1970 F86 Tractor Unit 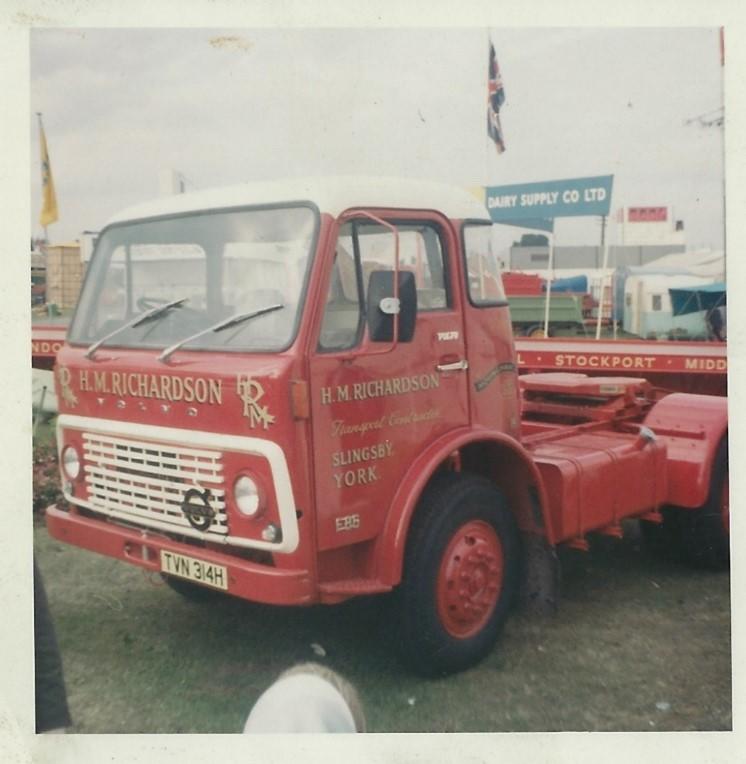 Henry was quick to embrace the concept of an articulated vehicle, which was maybe not the usual vehicle configuration in operation at that time, but the concept worked very well for him, providing flexible load carrying platforms with his purchase of a mix of flat body, tipping trailers and even a Racing Pidgeon transporter.

HM Richardson became well known for being able to adapt their fleet of Volvo lorries to do pretty much any transport jobs, no matter how varied the type of products they were hauling. 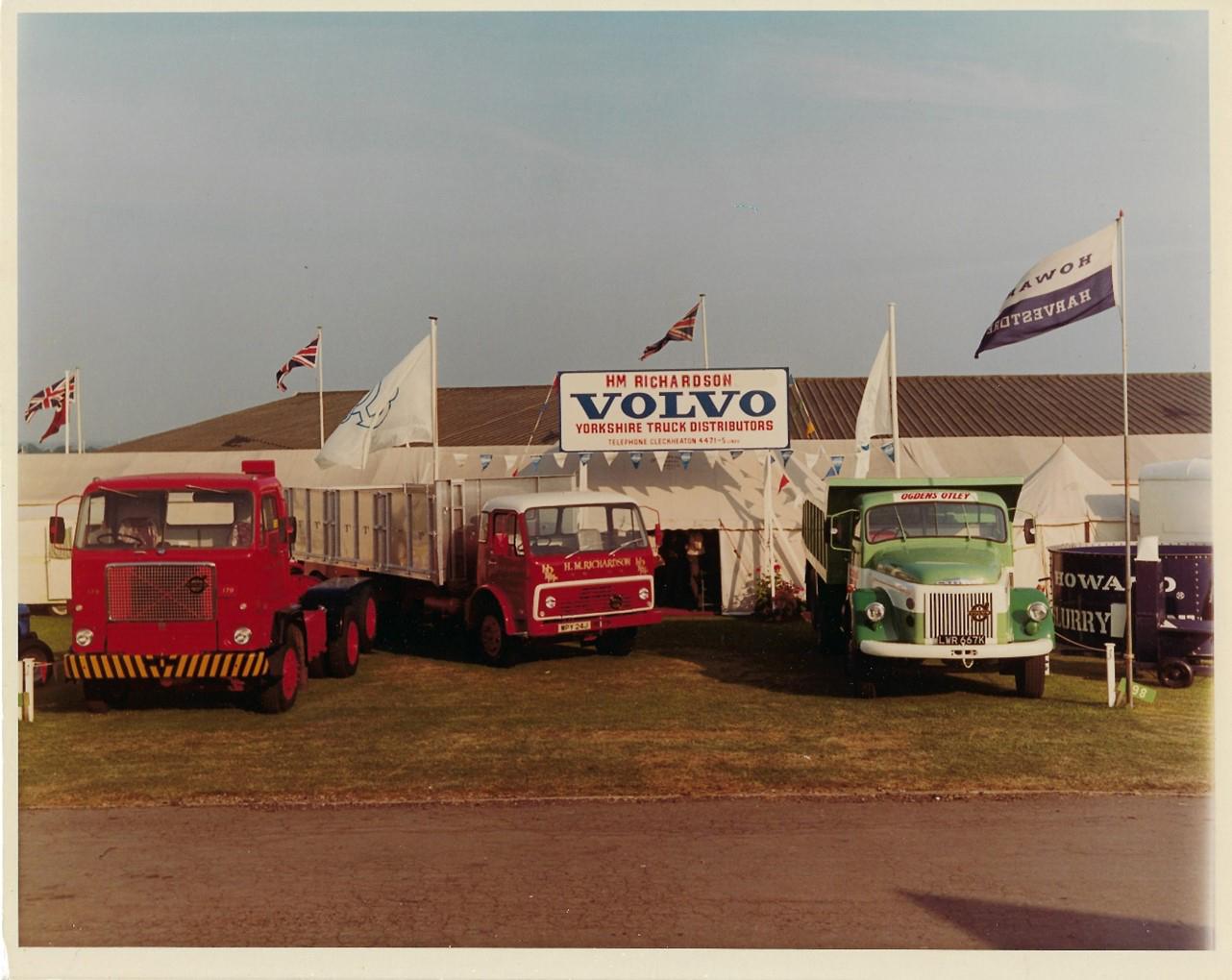 During the early 1970’s, rumours began within the industry that the GVW limits on articulated vehicles was to be increased, with that very much in mind, in 1972 Henry bought his first Volvo F88 costing the princely sum of £7,200.

Again, he was ahead of the game, making sure he had the correct vehicles available in the fleet to meet upcoming changes in legislation. The Volvo F88 was to become the benchmark that all commercial vehicles of this type were measured against, this new Volvo truck being equipped with a 10 litre turbocharged engine, 16 speed synchromesh gearbox and a sleeper cab for the driver that had overnight stays during the working week. The cab also tilted giving easy access for the mechanics.

As time passed, it became clear he was even further ahead than he envisaged as it was some years later before the weight limit was raised to 38 tonnes, but even so, he was still able to take full advantage of the advanced trucks he was operating and was more than ready to take advantage when the increased weight limits were eventually introduced. 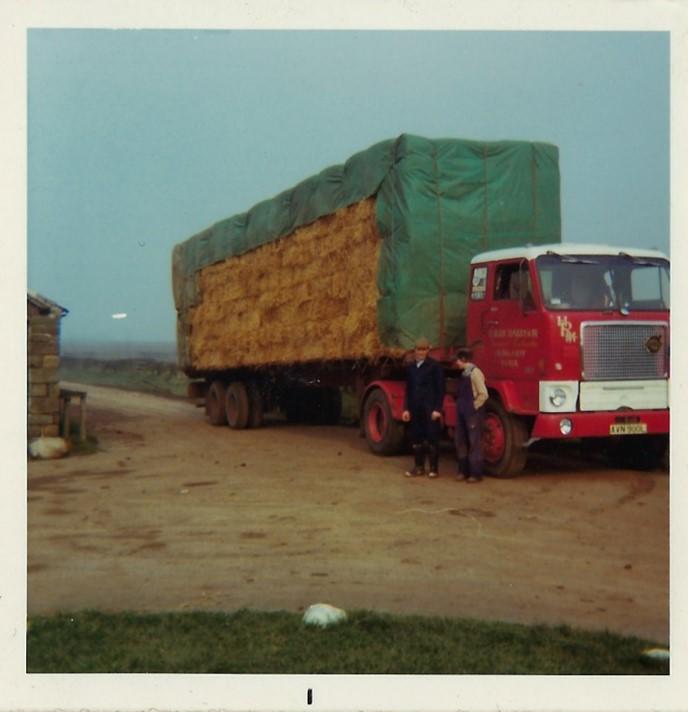 The same Volvo F88 lorry AVN 900L purchased in the 70's by H.M Richardson pictured above hauling a load of hay was eventually converted to a wrecker and is still owned today by his son Clive. 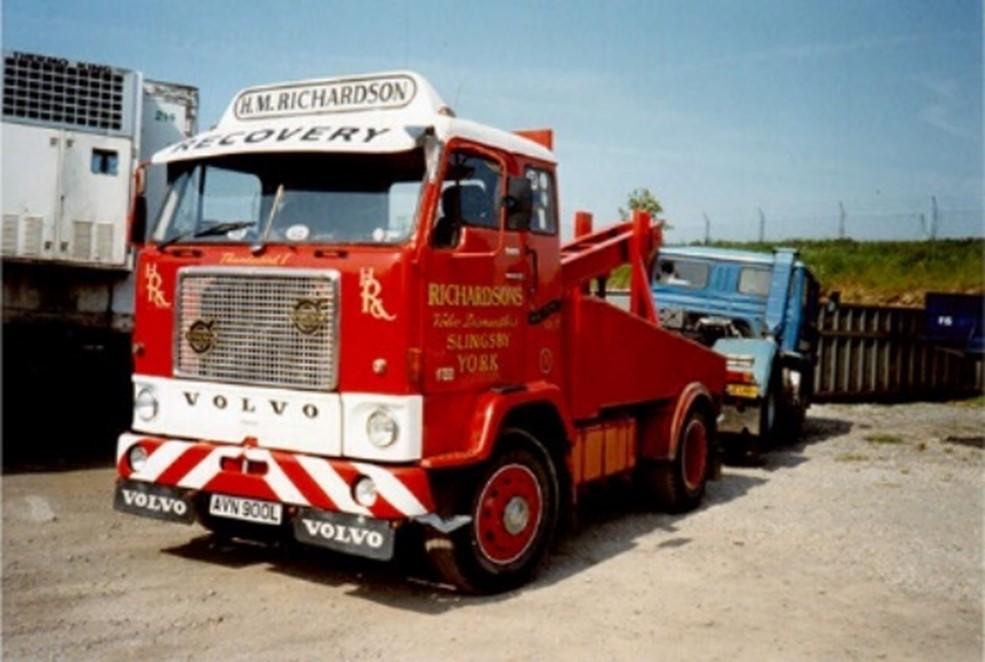 The Transition to Truck Parts

The business operated their fleet on what could be called a “cradle to the grave” policy, the aim with regard to a vehicle purchase being to get the ‘whole life’ out of the vehicle. Doing so inevitably meant the vehicles would require a series of major and minor repairs, resulting in the accumulation of a vast wealth of knowledge and experience in the repair and maintenance of Volvo trucks. In fact one member of staff that joined HM Richardson as a mechanic a few months after the first Volvo F88 arrived on the fleet in 1970 is still working for VTP some 50 years later!

Once each truck in HM Richardson’s fleet was uneconomic to use on the road it was broken up for spares which ensured a ready supply of good quality used Volvo truck parts for use in their own workshops, plus they were now supplying a large amount of second hand and reconditioned Volvo truck parts to other Volvo HGV operators.

As time progressed and Clive became more and more involved in the business, the demand for used, rebuilt and new aftermarket Volvo Truck Parts became a far bigger business activity for the Richardson's, so the transportation part of the business was slowly phased out. Today it has turned into VTP Ltd – specialising in heavy commercial vehicle parts for Volvo, Scania, Renault, DAF, MAN, Mercedes and Iveco Trucks.

VTP in the present day

In today’s transport sector, HGV spare parts specialists are just as vital as they ever were, VTP Ltd has more than 40 years of experience in the truck parts industry going back to the 70's and 80's when the changeover from transport company to truck parts supplier began.

Henry Richardson created a transport company called HM Richardson Haulage. His son, Clive Richardson turned that company into VTP Ltd, a Commercial Truck Parts retailer covering all the major truck brands in the UK. It’s the story of a family business that through innovation was and continues to be ahead of the times.

Today Various Truck Parts employs some 28 staff between its offices, warehouse and workshops at their premises in Kirby Misperton in North Yorkshire, not far from where it all began in Slingsby.

And yes, it is still very much a 'family business'. On any day that VTP are trading you will find Clive at his desk, enthusiastically involved in every part of the company’s present day operations at VTP 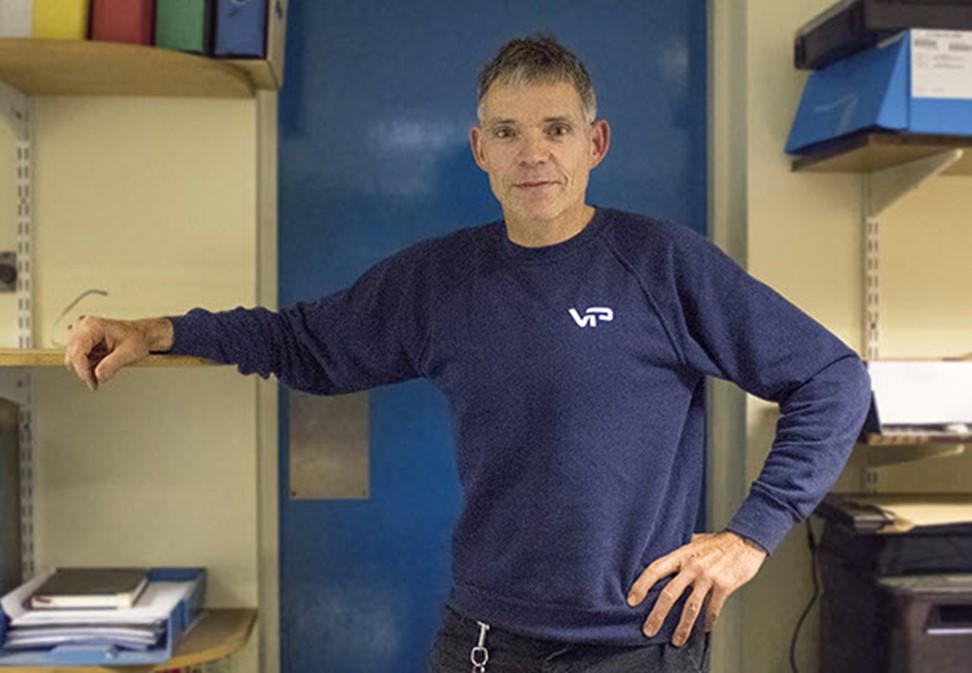 VTP today is a fair way removed from the original haulage company Henry founded all those years ago, but remains very firmly based on the same core values, constant innovation and always looking to invest in technology to help us provide an even better experience for our customers

VTP are very much one of the North’s leading Truck Parts suppliers, currently stocking over 12K lines of commercial truck parts to fit Volvo, Scania, Renault, DAF, MAN, Mercedes and Iveco Trucks, plus a range of Bus & Coach Spares, all available to purchase from www.vtp-uk.com for next day (and in some cases same day) delivery.

You are also most welcome to collect your Truck Parts in person, where Clive will rarely be far away from our trade counter if you want to speak with him or any of the highly experienced staff, all of whom will be glad to assist you

The Future for VTP

With a worldwide Covid-19 Pandemic in 2020, the future is unpredictable to say the least, but at VTP we are used to rapidly evolving and embracing new ways of working, so whatever the future holds, VTP will be right there at the front line with Clive leading the way, just as Henry was before him.